Following on from Kate Atherley’s article on charting Brioche and Fisherman’s Rib Patterns I thought that it would be useful to detail how to chart Tuck stitches in Stitchmastery.

Tuck stitches are common in machine knitting patterns and you will find many examples of interesting tuck stitch patterns in commercially made knitwear. Sometimes these are repeating patterns as in this tuck stitch formed over three rows that forms a diamond effect;- 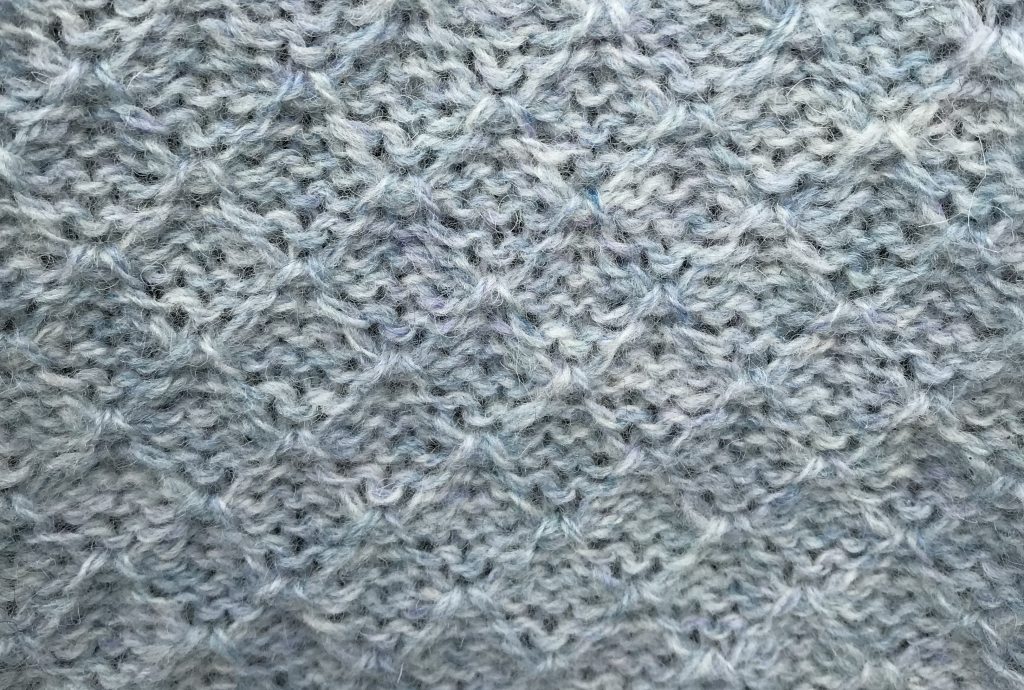 Another very effective way of using tuck stitches is to incorporate a column of tuck stitches into a lace or cable pattern. The tuck stitches emphasize the vertical line or lines and can be a useful way of changing up a stitch pattern. In the example below two columns of stitches tucked over a single row transform a lace pattern. 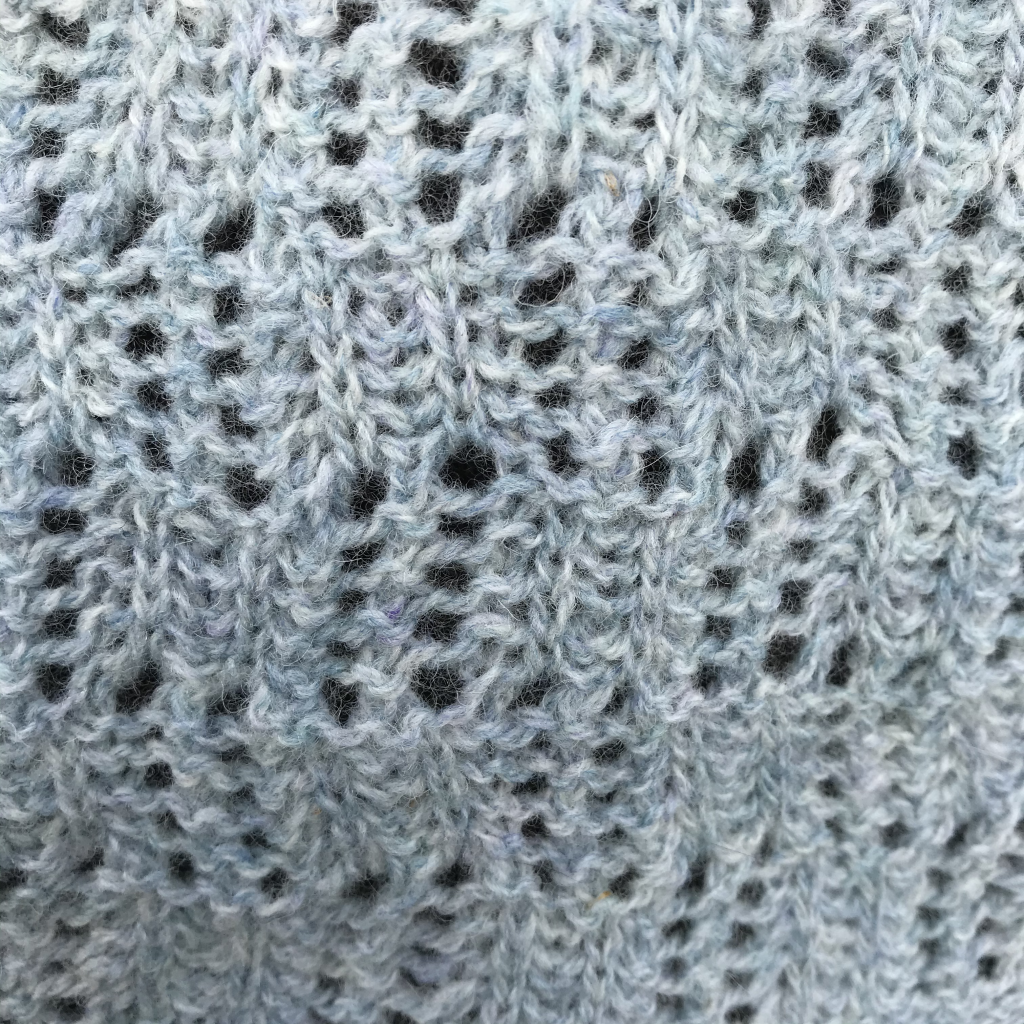 Brioche stitches have been widely charted using Stitchmastery with the most common symbols used being;-

Brioche is essentially a tuck stitch where the ‘yf sl1yo’ is worked only once before a ‘brk’ or ‘brp’ is worked.

When it comes to working tuck stitches there is an additional symbol, ‘yf sl1yo plus’ that is an elongated form of the ‘yf sl1yo’ symbol used in Brioche but can be used over several rows to make a symbol to represent a stitch that is ‘tucked’ multiple times.

In terms of Tuck knitting it can be helpful to redefine the symbols as;-

Note that these re-definitions do not refer to the number of yarn overs on a stitch. Hence the number of symbols and stitch definitions needed is kept to a minimum and the key and chart are clear and simple;- 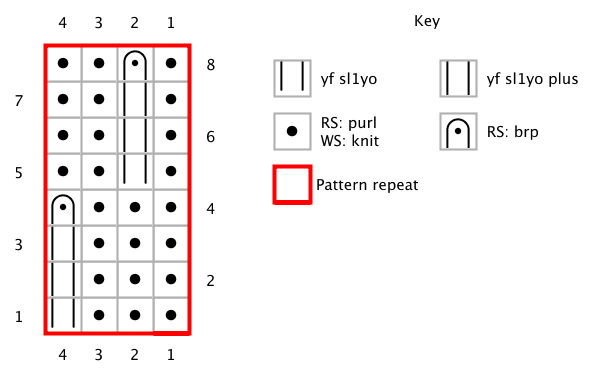 This is particularly useful when stitches are tucked over many rows;- 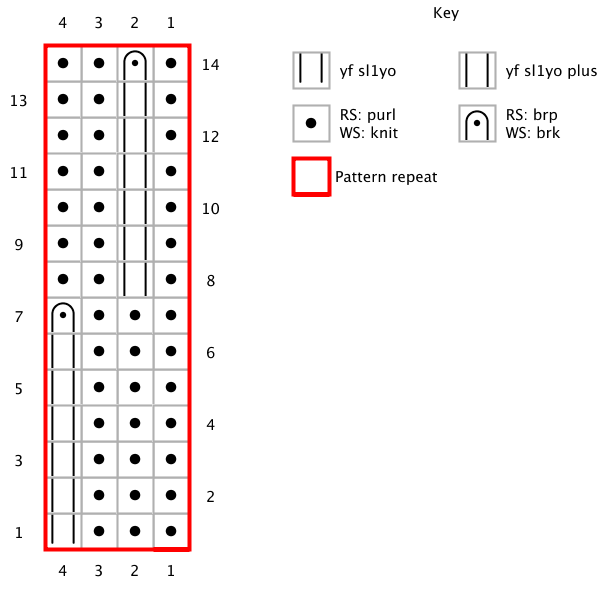 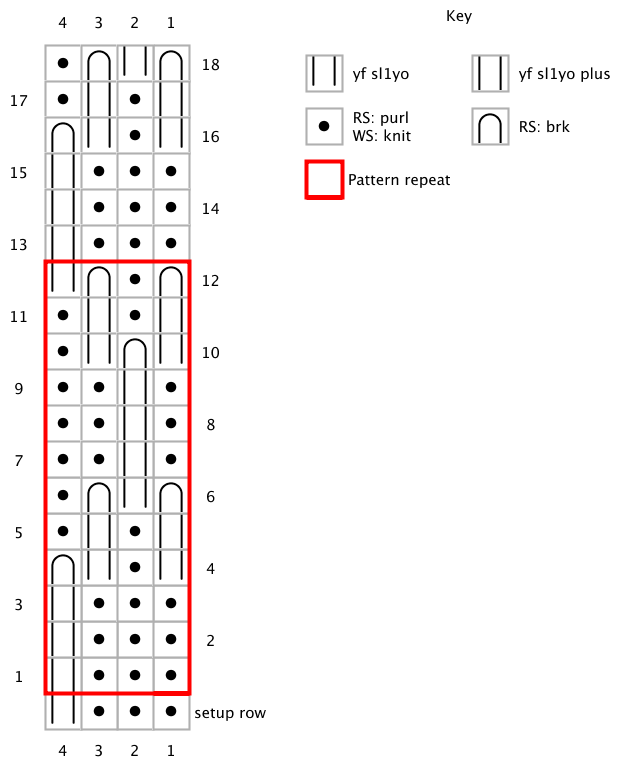 Yet, the tuck symbols can be re-used which makes the resulting chart easy to read and the key short and simple.

Short rows are an incredibly useful technique in knitting. They’re used to create curves, change stripes, turn corners and add bust shaping. Although simple in principle, they add a fair degree of complication to pattern instructions, and can be a particular challenge when building them into charted patterns. Stichmastery makes the key element of dealing… END_OF_DOCUMENT_TOKEN_TO_BE_REPLACED

When we launched Stitchmastery Version 3, one of the key additions to the programme were German and Danish translations of both the system Stitch Libraries and the Text Templates stylesheets. We were able to add these thanks to designers who helped us with the translations. This addition to the software means that anyone who would… END_OF_DOCUMENT_TOKEN_TO_BE_REPLACED

We’re pleased to let you know we have released an updated version of Stitchmastery – Version 3.0.2. This version has the following changes: – fix for bug that affected users with a machine set to a language other than English which prevented them editing stitch symbols – fix for bug that meant that stitches did… END_OF_DOCUMENT_TOKEN_TO_BE_REPLACED

The latest version of Mac OSX, High Sierra, has been made public and there is a bug in it that affects Java applications including Stitchmastery. The bug disables the menus of Java applications rendering them unusable. It seems to affect only those users who have their operating system language set to something other than English.… END_OF_DOCUMENT_TOKEN_TO_BE_REPLACED

A little while ago I wrote gave some examples of how ‘Borders’ and ‘Repeats’ could be added to a Stitchmastery chart (Repeats and Borders on a Stitchmastery chart) and the differences that these made to both the visual appearance of the chart and to the written instructions that Stitchmastery automatically generates. The bottom line: if… END_OF_DOCUMENT_TOKEN_TO_BE_REPLACED

One of the first publications to begin using Stitchmastery to create all of their knitting charts was Knitty. That was nearly 5 years ago in the Winter bis 2011 edition;-   Save Save In that edition Knitty also published a review of Stitchmastery and explained the reasons why Knitty adopted Stitchmastery as their official charting… END_OF_DOCUMENT_TOKEN_TO_BE_REPLACED

How you ever thumbed through a stitch dictionary looking for exactly the right stitch pattern for a knitting project that you had in mind? Perhaps you have found a stitch patterns that’s almost right but not quite there? Or perhaps you want to find a stitch pattern that’s different from any that you’ve seen? In… END_OF_DOCUMENT_TOKEN_TO_BE_REPLACED