I absolutely adore slipped stitch colourwork patterns because you get all the visual effects of stranded colourwork, with significantly less risk of tangling. If you’ve not tried them, I highly recommend giving it a go.

The crux of it is that you actually only work with one colour at a time.

Let’s say you want to create a pattern in blue and white, alternating colours every stitch.

But with the Slipped Stitch method, you only need one colour at a time.

It takes two passes to complete a full row.

Traditionally, you work both the RS and WS rows with one colour before changing to the other, so that this pattern can be worked on straight needles, rather than requiring circular needles. And that pair of RS and WS passes are always worked the same way. This means you’re using four passes to complete two rows.

This gives you a vertical stripe pattern, with a 1-stitch selvedge on either end. (You can actually skip the selvedge, but for the purposes of learning, I find it a little easier as you’re not fussing with making sure the yarn is in the appropriate place when slipping the first and last stitch of the row.)

If it’s worked in the round, it would look like this:

As shown in the examples, you can easily create charts for these patterns in Stitchmastery. Just use the standard Row or Rounds setting, based on how you’re working. When doing this, you always have two consecutive rows/rounds that are the same. For charts worked in rows, you can hide the WS rows of the chart – just make sure your instructions are clear about what to do on the WS rows/passes.

Note that the in-the-round version illustrates a possible slight challenge for the knitter: if you’re not experienced with reading these types of charts, it’s not immediately obvious which colour you’re to work with.

Some designers like to add an extra “information-only” column on the right-hand side of the chart, that indicates which colour is to be used for which pair of rows/rounds. If you’re doing this, remove the stitch number from that column, and make sure there’s clear instructions on what that column means. A border can be helpful, too. In this chart, the unlabelled column is not a stitch, it’s just an indicator of what colour is to be used for the round.

To do this, I created two new columns on the right side of the chart, and changed the first column number to -1 in the Edit Chart Properties dialog, so that the actual stitches would still be labelled properly. I hid the column ID numbers for both, made the first one the colour indicator. I set the second column to all ‘no stitch’ and hid those. The border is there for extra emphasis.

This applies equally well to patterns worked in rows, too.

There’s a Mosaic setting in Stitchmastery, and it’s connected to a slightly different way of working.

When creating a new chart, if you choose Mosaic, the chart sets up so that you have two rows in each direction – two RS rows, then two WS rows. 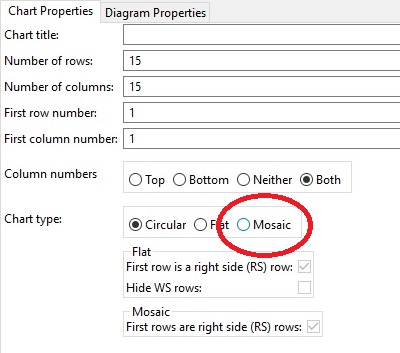 This setting changes the order in which you work the rows – you work across the stitches with the first yarn, slide the stitches back to the start of the needle, and work across again, in the second yarn. If you’re working in the round, no sliding is required – just alternate the colours every round.

You can do classic slipped stitch patterns this way; the end result is the same, it’s just a different way of working.

For most standard slipped-stitch colourwork patterns – whether worked flat or in the round – I tend to choose the first version, because I think it’s a little easier to read the charts, and understand the big picture. Most stitch dictionaries and sources for classic Slipped Stitch patterning do it this way, too, but there are exceptions, based on the patterns.

It’s worth providing a little history, for context.

Barbara Walker was the first to write about this method of knitting at length, and she used two different methods to write/chart the instructions, for different situations. Her First and Second Treasuries do have Mosaic patterns, but they only include written instructions. In her book on Mosaic knitting, everything was charted – thank goodness! Her method was to put two row numbers on each chart row, one at each end, as in this image: 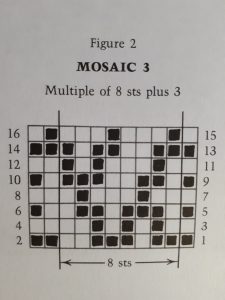 Her rationale for this makes perfect sense if you’re working back-and-forth in rows, as you’re working the same pattern on two rows, once right-to-left, and then a second time left-to-right. It’s a more condensed version, in that you only show a “pattern” row once – just as if you’d hidden the WS rows with a standard Stitchmastery chart. There are two weaknesses with this method, however: the first is that because of the position of the alternate row numbers it’s not naturally applicable for working in the round. (It’s easy enough to explain in the written instructions, but without sufficiently clear notes it can risk confusing the knitter.)

The second is that this type of method and charting works brilliantly if both passes in one direction are the same – that is, if the MC pass is worked the same as the CC pass – but they aren’t always.

In the second Treasuries she uses the other method, for different types of patterns: a single pass of a row in one yarn, and then returning to the start of the row to work across in another yarn.

This Tiny Check Pattern from the Second Treasury is a great example of this.

(If you’re rushing to look this up in the book, for ease of charting I started with Row 2 of the pattern.)

You couldn’t do this with the standard row setup, as each of the Color B passes is only worked once. The name “Tiny” indicates the difference here – instead of stitches being slipped across two rows, they’re only being slipped across one. The resulting patterning is smaller and more delicate, while opening up a whole range of other fabric and pattern options. Next time you’re playing with two colours, it’s worth experimenting to see which effect you like best.

In my next column, I’ll talk about Brioche pattern stitches, which are curiously related!