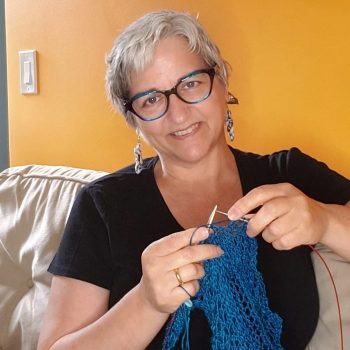 Like a lot of people, the tradition was passed to me by my Grandmother, which was crochet. I made these long chains, and the big excitement was to learn how to “crochet backwards”, which was actually just making the second row! I did crochet for many years, making Barbie clothes and the like. Then around 1994 I was attending jewellery-design and metalsmithing classes at the Worcester Centre for Arts and Crafts in Massachusetts, and a friend there had made this gorgeous knitted blanket. It was stunning – the colours and textures really grabbed my interest. She taught me and my daughter to knit and we started off, like everybody else, with a flat scarf, which we gave up on! A couple of years later, I decided I wanted to knit a sweater and went into a local yarn store, and something must have given them the impression I knew more than I did, because I came away with an expert level pattern, made in pieces – I’d never seamed before! It was sadder than the scarf I knit, it was terrible! But it was just around the time that Ravelry started, and somehow I heard about it. That opened up a whole new world for me, I loved seeing people’s reviews of patterns and their mods, and tips and links to tutorials. YouTube helped me learn many new techniques and I got hooked from that.

In 2017 I started seeing Frenchie Danoy (aka Aroha Knits – read her Stitchmastery interview here) and tried out some of her free challenges eg the 5 shawls in 5 days, and was really ready to leap in when she launched the SWATCH Studio. It was such a supportive atmosphere and great to learn how to design amongst other people, with ongoing learning. So that’s how I began knit design, and I’ve been part of the SWATCH Studio ever since. I really recommend it. It has been really helpful for setting up my design business – having someone share the process and give so much advice, and working alongside a group. Often I’ll learn things by accident – someone will post about something they’ve learned, and I didn’t even know I didn’t know it! It really has alleviated the loneliness of setting up something new on your own.

There are two main muses in my work – family stories, and textures or techniques. Some of my most successful patterns have been the ones with a deeper personal connection and a story to tell about them. For example, my Ocean Home Shawl [pictured below] is about how I rediscovered that the ocean is my place of emotional and spiritual healing. I can go there no matter what’s going on, and it’s instantly calming for me. Even just thinking about the ocean, I can take a deep breath and feel more relaxed and grounded. 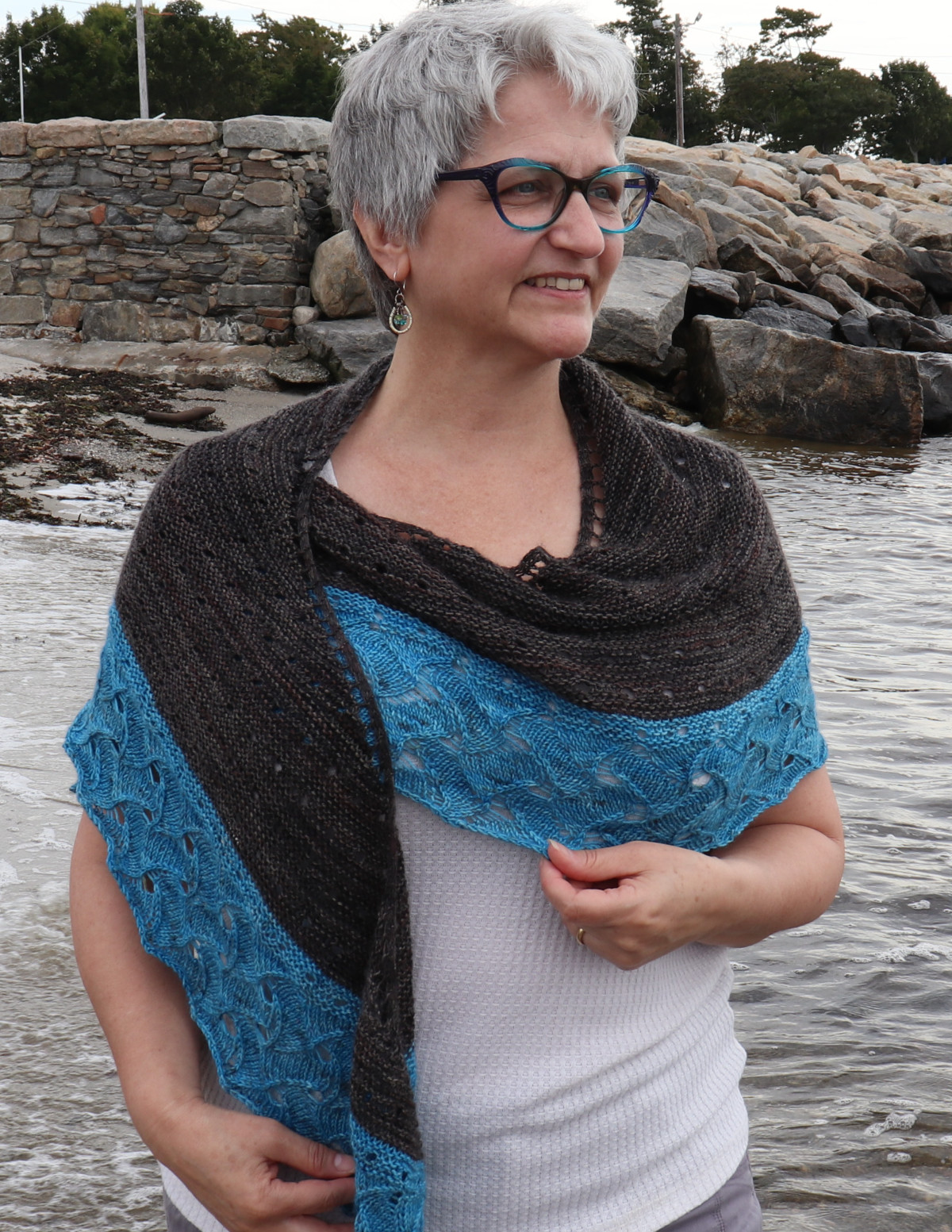 My Kimono Moon Shawl [Ravelry link, shawl pictured below] was initially inspired by Japan. However I was knitting it around the time my daughter moved to New Zealand to start her PhD and that changed the story. I realised that with every shawl stitch I was missing her terribly. This shawl makes me think that special connection to my daughter and the ones that exist between mothers and their children. I wrote about this in the pattern, and (as with many of my designs with stories) I began to hear back from knitters who resonated with the story. One in particular told me the story had made her think of being a daughter and her mother missing her at that point in life, but the knitter was now a mom herself and going through the same situation. I really love getting those connections back. 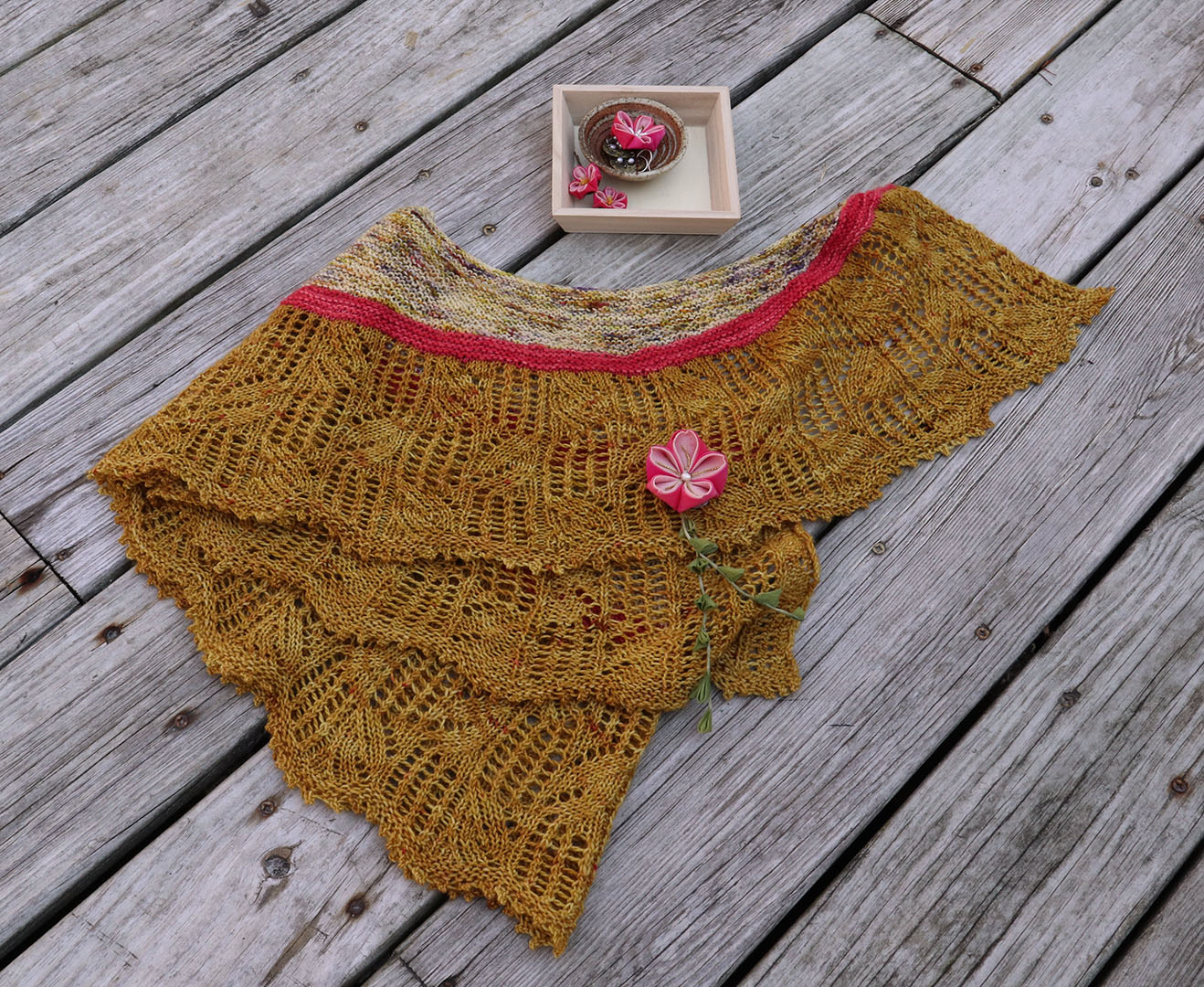 Not all of the family stories inspirations are deep and meaningful – I have one hat pattern that was inspired by the memory of my brother always breaking windows around the house and barn, and I’ll soon be re-releasing my Grandpa G’s Barn Cowl which was inspired by a strange barn at the house my Grandfather bought [click on the pictures below to see full size]. The barn is built into the hill with thick concrete walls, and one day my Dad was digging around at the back and found pipes coming out of the basement of it. It turned out it had been used for making illegal rum! I like to throw fun and funky stuff in there too. 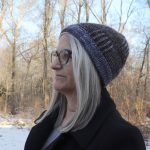 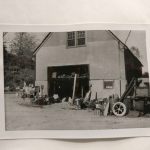 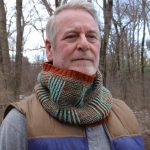 The other muse is textures or techniques – I’ll see something I *really* want to learn, and try to incorporate that into a pattern to teach it. For instance, when I came across brioche for the first time, I was inspired to design something that would make learning the technique as simple as possible, and designed a two-color hat, knit in the round so that you have fewer new techniques to tackle at once. Then later you can start a flat piece and learn increases and decreases, but you’re not drowning in it to begin with. I always want people to feel they’ve been successful and had a positive experience after knitting my designs – it shouldn’t feel like a fight! So the problem-solving element to learning new things is often a point of inspiration for me, and an abiding principal of my patterns. With my test knits, I try to include people who’ve never tried a technique before, and my test knit group have come to trust me to guide them through something new.

I tend to chart first, in Stitchmastery – it tells me what’s possible with the stitches and the maths, before I commit to swatching it. I like to start all my designs in Stitchmastery to get the written instructions in my own style (I have custom stylesheets set up), even if it’s a pattern that doesn’t need a chart in the end. Sometimes I’ll draw out the shape first, but I’ll always chart before sitting down with my needles – it takes a lot of the guess-work out of it.

Then I will swatch to see how it looks. Sometimes things that look great on the chart don’t turn out the same way when translated into yarn – for instance, lately I’ve been working on a new shawl combining vertical and horizontal mesh stitches. It looked really interesting in the software, but nothing short of an uncoordinated mess when actually knit! That’s something Stitchmastery couldn’t tell me – the stitch count worked, but it didn’t look good. The Meshing Around shawl will be out in November.

Having the free trial as part of Frenchie’s SWATCH Studio was the main reason in the beginning, it was a great opportunity to try it out in advance. She teaches a few classes on using it, which made it easy to get into the swing of using it. It’s great having the bank of tutorials to come back to. I think it’s excellent value – I couldn’t do my job without the software.

In terms of particular features, I’m glad to be able to go into the library and change the instructions for different stitches to suit just how I want to explain them, and having the continuity of having that saved to come back to each time.

One thing I would love would be to have the ability to overlay the chart over an image. The dream!

Well, Meshing Around will be out in November, and I’m also working on a specific theme around cowls – how to make a lace cowl which stands up enough that you can see the design properly, without it collapsing around your neck. I’ve been trying various approaches – knitting at a stiffer gauge, chunkier yarn, lining the cowl, making it shorter, making it tighter … it’s been fun to experiment! The aim is, as always, to create something that’s simple to knit but still interesting, and functional. I could release what I’ve come up with the accordion folding thing bugs me … I don’t believe in perfectionism but I just don’t think your lacework should be hidden unless you purposely want that!