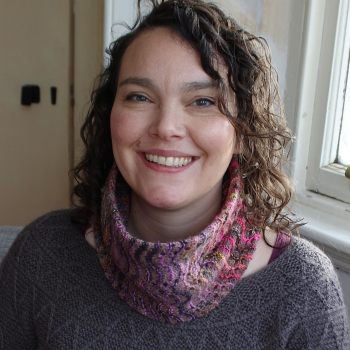 I learned to knit as a child, from my mum and one of my grannies – both knit, but one more than the other. I don’t remember much about the learning process, but I do have a very clear memory of holding metal needles and knitting very tightly with squeaky acrylic yarn, and being told I needed to knit more loosely and not really understanding how that was possible. It makes me laugh now, as I am quite a loose knitter now! I didn’t pick the knitting up again until I was pregnant with my eldest, and later when I was at home with two young children I needed something that was just for me, so joined a knitting group and got completely obsessed! I wanted to learn as much as possible, and enjoyed having that creative outlet again, thinking about what project I’d make next, and what yarns and colours I’d use. I think it’s really important for everyone to have some kind of creative outlet, whether it’s knitting, or cooking or gardening or whatever else. I’ve always been quite creative – art was my favourite at school and I did a Fine Art foundation course after school, before becoming a primary school teacher. There are quite a lot of dressmakers and tailors in my mum’s side of the family so I did a lot of sewing before I got into knitting. I think you have to be more careful with sewing and it’s much less portable, whereas you can shove your knitting into a bag, and you can’t really rush and make a major mistake – you just have to be patient, you can only knit as fast as you are physically able!

As I got more into knitting, I started adapting patterns and experimenting more, and then took some classes about designing, with Karie Westermann and Joeli Kelly. Joeli encouraged us to submit design ideas to magazines and I sent a shawl idea to Knit Now, which didn’t get accepted. Later I saw Kate Heppell, Knit Now Editor at the time, at an event and uncharacteristically went and introduced myself and asked for some feedback. She encouraged me to try again and my Sycamore shawl was commissioned. It has recently been my 5th anniversary of designing and I think back to the stress I felt when designing that shawl, it was quite painful at the time, but looking at it now I can see how far I’ve come, as it’s quite a simple design really.

I also teach knitting with Knitting For All. I find teaching really satisfying, especially children and teenagers. They can teach us a lot – they are so imaginative and less constrained with their ideas, and because they don’t have an expectation of it going to be tricky, they’re not so intimidated. It makes me realise that as adults we build up a fear of getting things wrong but children are used to having to learn new things and don’t expect things to be perfect straight away. It can be quite refreshing. 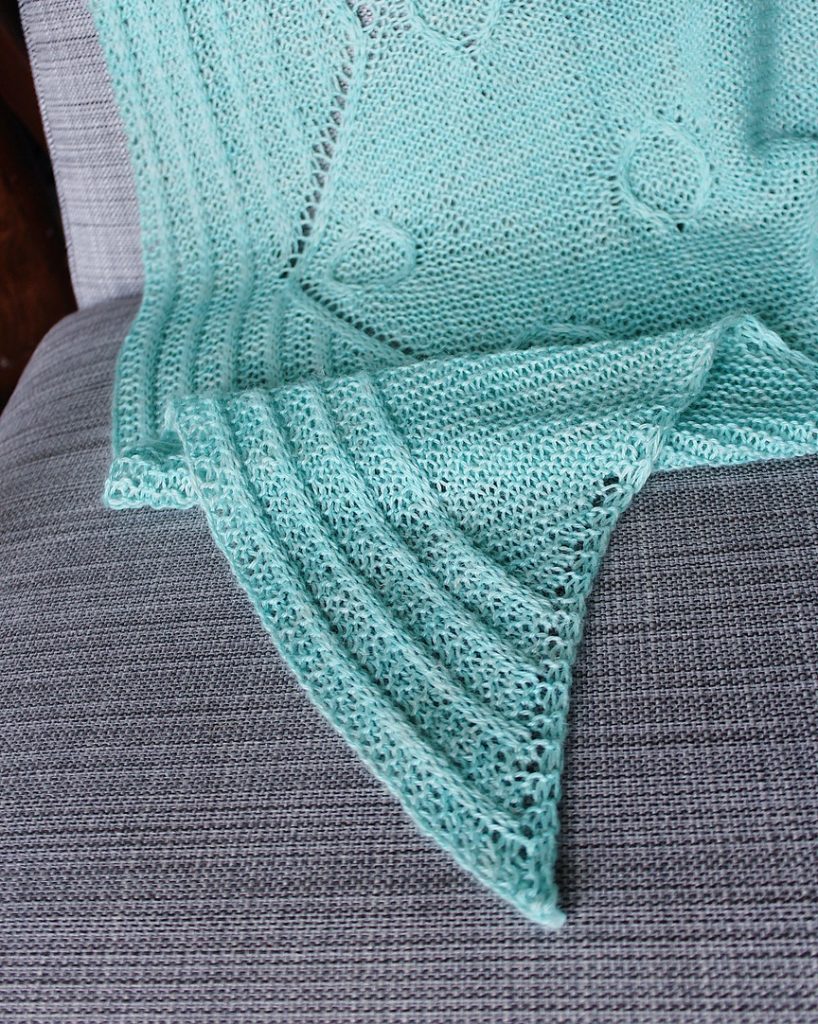 I don’t really have one particular source of inspiration, it can be lots of different things. I do enjoy experimenting from stitch dictionaries, the quirkier the better. One of my favourites is a Vogue Knitting one from the 80s, with Andi MacDowell as one of the models [HR: yes, we both reminisced about that “is it still raining? I hadn’t noticed!” scene!]. You find that some of the stitches don’t necessarily look particularly appealing on the page, but when you swatch them you can tweak one of the stitches or change the look of them by adding a different colour, and come up with something more interesting.

I also take lots of photos and screengrabs of things that grab my interest – sometimes that’s knitwear, but it can be anything, especially things with strong graphic lines and shapes. My phone is full of things I think are quite interesting, or make me think of stitch patterns. I’ve been trying some swatches for a jumper based on a multi-storey carpark that caught my eye with its lines and repetitive shapes.

Of course, with magazine commissions you are often given a mood board to start from, and sometimes if you’re sent yarn to work with, it can dictate what the stitch pattern will be – you might have an idea of a texture and then discover it just doesn’t work with the yarn.

I tend to swatch first, and sometimes draw chart ideas on squared paper. Quite often I will start the chart in Stitchmastery pretty early on, for the simple reason that I find it easier and neater to tweak and delete things than rubbing out on the paper! I do like to chart fairly early because sometimes you come up with something that you realise isn’t going to be chartable and it’s better to realise that sooner rather than later. For example, if you’ve got a shape that’s increasing and the pattern repeat doesn’t fit well into the numbers. I can’t always tell that from the pure numbers, I like to be able to see it, like a model.

I tend to have various versions of charts, and I’ve started putting the date into the file name to try and keep track, in case I’ve accidentally saved a different version somewhere else – I can’t always remember how many versions I’ve done, but I can usually work out from the date! I’ve also started getting more comfortable using spreadsheets for stitch counts and gauge calculations, and different sizes. I was never very keen but now that I’ve gotten the hang of doing the formulas, I can see it’s really helpful. 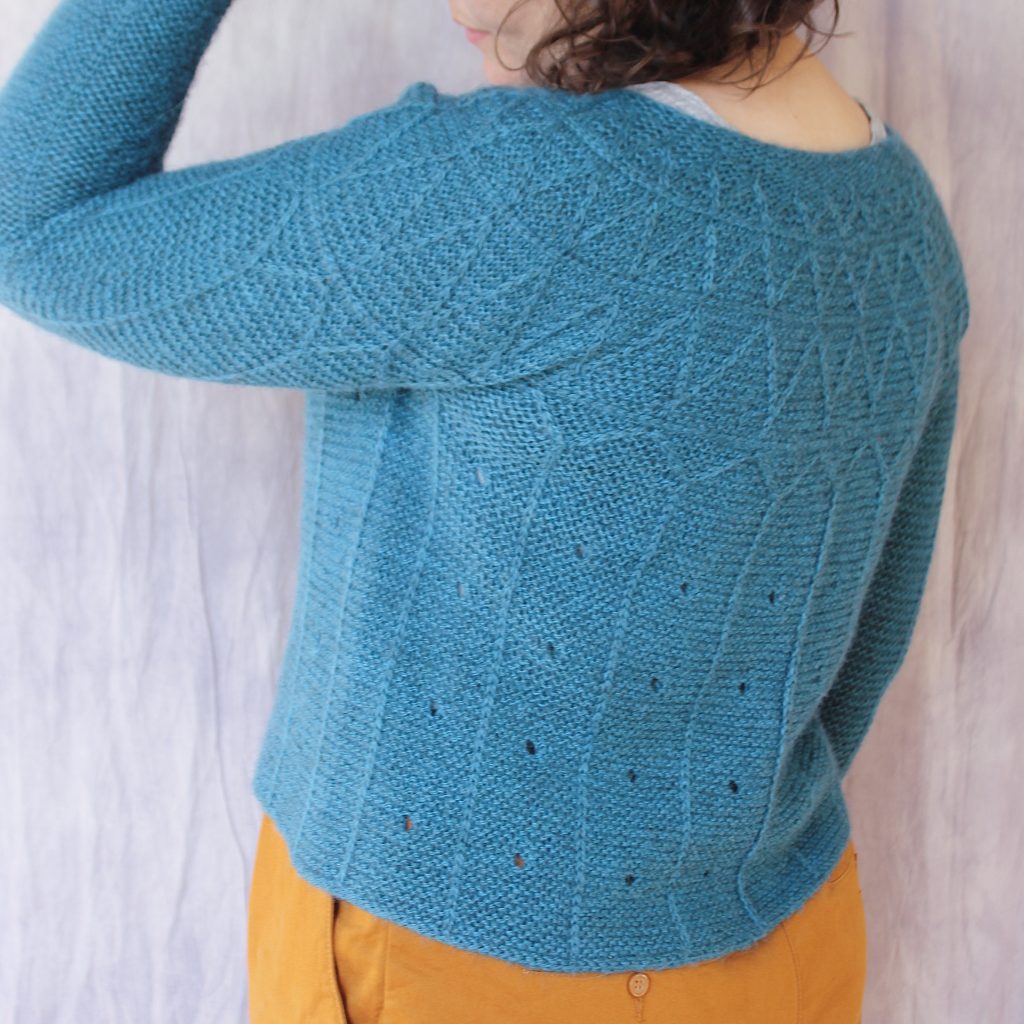 I think I was recommended by Joeli Kelly and Knit Now, and quite a lot of the magazines and books I’ve submitted to use it, which is great as it means they can open the charts and edit things like fonts and other styling things. I like setting custom colours to match the yarn I’m using as closely as possible, which I find really helpful for knitting samples. I love the dropper tool (on macOS) so that I can pick the colour from a photo of the yarn.

I know there’s a lot that Stitchmastery can do that I’ve not learned yet – I feel like I should block out some time to investigate everything more. Sometimes it doesn’t make sense to learn loads of things at the start if you’re not going to use them straightaway as you forget them. But I always feel like – if I need to do something new with it, I know where to find out how, which is great. 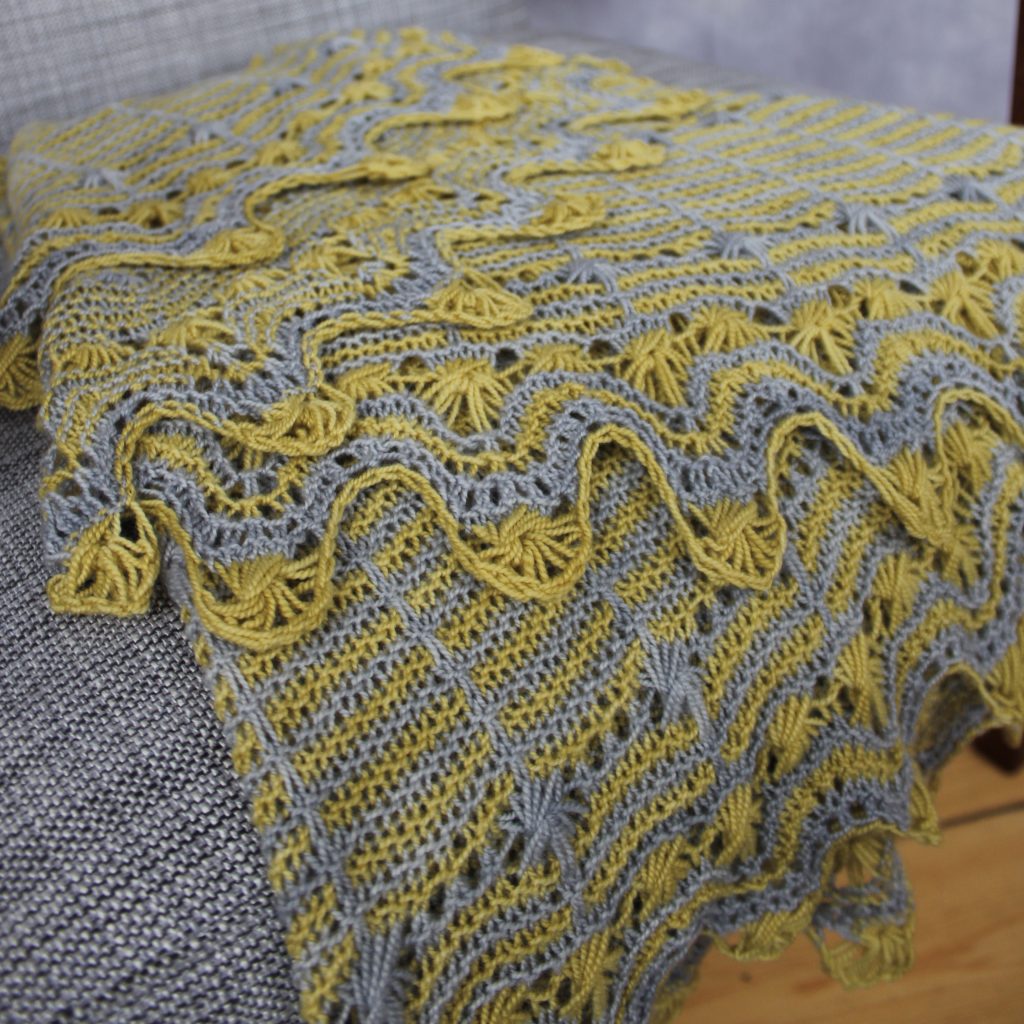 Coming up in September I’m running my second mystery shawl knit-a-long, which I’m really looking forward to. I have the design all worked up and like last year, I’ll be working with an independent yarn company who will be offering gorgeous kits.

Last year’s Trigpoint Shawl MKAL had a really lovely community feel about it, with lots of people getting involved, many of whom hadn’t done a mystery design before and some who didn’t have a lot of shawl knitting experience. The MKAL also included weekly zoom knit nights, where people could get help from me with their shawl or just come and have a chat with other knitters, so hopefully this year’s knit-a-long will have a similar vibe.

The other big project that I’ve been working on is a collection using mohair lace, all patterns that use small amounts. It feels like mohair has been really popular lately and I always find a ball of mohair lace goes on and on and on, so I imagine lots of people have leftovers! It will be coming out in the late autumn, probably with a design released every two weeks. There will be 2 garments and 4 accessories, unless I add more. . .

I also have a handful of designs coming out in the next six months that are collaborations with yarn dyers or part of publications, so something else to look out for!