Welcome to Cathy Scott’s StitchMastery. Over the previous few months I have been working hard on a collection of fonts that can be used to create knitting charts.  There are already several knitting fonts available so why create more? 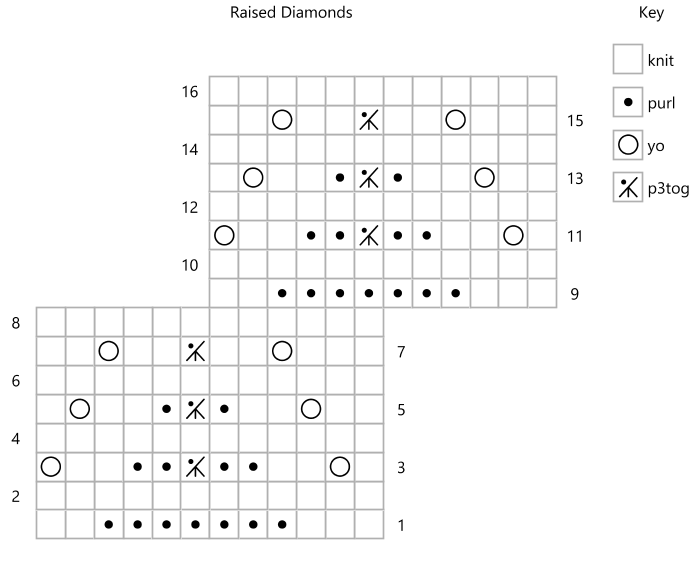 What stitches do the fonts support?

The popularity of the internet and the arrival of the wonderful social networking site, Ravelry, have increased knitters’ awareness of different knitting cultures and fueled an interest both in exploring stitch patterns and also of designing new garments or accessories using these patterns. Yet many of the existing knitting fonts do not have symbols for many of these new stitches. Particular examples are symbols for estonian stitches, twined knitting or brioche/patent stitches.

The knitting fonts that I have created do have symbols for all of these as well as the more traditional k2tog, ssk, etc.

Of course, given knitters’ creativity, it would be impossible to provide a symbol for every single stitch known in the knitting world. Somewhere, some knitter will come up with a new one.. New variations on cables such as ribbed cables that are reversible, brioche cables or cables using twisted stitches are constantly being used in designs. Hence one of the fonts is based on the idea of ‘building blocks’ that can be used to chart a cable, ‘bind off’ stitch or clustered stitch using any combination of other stitches. Supported stitches for ‘building blocks’ include knit, purl, twisted knit and brioche knit, although if there is sufficient demand others will be added. Another font provides symbols for cables that are the width of the number of stitches in the cable. More on the cable fonts in future posts…..

One issue that seems to bedevil knitters are the huge variety of symbols in use even for the same stitch. Or the same symbol can be used to represent different stitches even within one publication! There is no one global standard for knitting symbols in charts.  The closest to any standards are the JIS L 0201:1995 published by the Japanese Standards Association and the Knit Chart Symbols of the Craft Yarn Council. However neither of these supports more than a basic subset of known knitting stitches and are generally not widely used outside Japan or the US respectively.

So where does all this leave knitting designers, particularly independent designers who wish to submit to several publications? Can fonts support this wide variety without limiting designers or confusing knitters?

Firstly, there are a large number of symbols in the font and there is no limitation on which symbol you use for a stitch. Several different symbols for k2tog that are in common use are included in the font so anyone using the font can pick the one they wish.

Secondly, the fonts are organised into ‘families’ based on commonly used charting styles. At present two ‘families’ are supported although more may be added if there is sufficient demand.

The first ‘family’ is called the ‘dot’ family named for the fact that the purl stitch is represented by a dot. Purl variants of knit stitches such as p2tog, ssp, purl brioche, etc all use a dot to distinguish them from their knit versions.

The second ‘family’ is called the ‘dash’ family (yes – I know the naming is not very challenging…) and the purl stitch is represented by a dash. Again, all purl variants of stitches use the dash.

The clever part about organising the fonts like this is that the corresponding stitches in each font family are at the same place in the font. So typing ‘p’ on the keyboard gives you a dot when working in the dot font and a dash when working in the dash font. Similarly with p2tog, ssp, etc.

So as long as the chart uses symbols from the basic font (i.e no cables), changing from one charting style to another is as easy as changing the font… 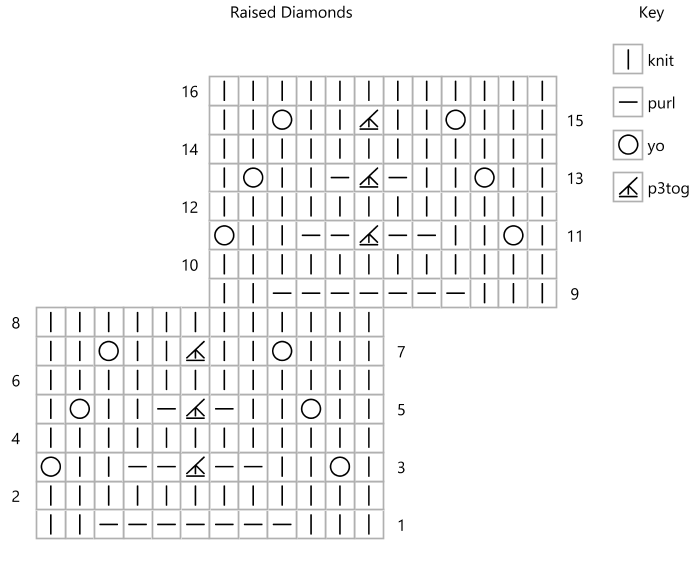 At this point I must acknowledge the help of a wonderful knitter and tester, Mairi McKissock, for help in coming up with this idea. It had always been in my mind that knitting software should support the idea of multiple ‘stitch libraries’ so that users can easily switch charting style within the software by simply switching stitch library. However the idea of doing this at the font level means that those designers and knitters who are using software such as Excel or OpenOffice can also switch easily between styles.

How can the fonts be used?

The fonts will be available for purchase. The fonts can be used by designers and knitters for use in patterns either for their own use or for commercial publication. The fonts can be embedded into read only pdfs for publication and sale so that the readers of the pdfs do not have to have the font installed themselves. However the fonts themselves cannot be distributed in any other way.

The fonts have been tested in Microsoft Office (Excel and Word), OpenOffice (Calc and Writer), iWork (Numbers and Pages) as well as AutoCad and SlickEdit, Adobe Illustrator, Adobe InDesign and Scribus.

They can used in a table form to create a chart or ‘inline’ in text to create a stitch key or list of abbreviations.

The fonts can also be used in specialist knitting software that accepts fonts as a way of importing symbols.

The fonts will also be used by the upcoming StitchMastery Knitting ChartEditor software that is currently in development. More details of this in a future post.

Many, many thanks to all the wonderful knitters who have helped test these fonts. I know that there are already designs published that make use of them which is very rewarding for me. Thank you again.