On The Wrong Side – Cables – a guest post by Kate Atherley

A great question came up recently in the Stitchmastery group on Ravelry and we thought it was worth exploring.

It’s related to a previous article about stitch definitions for the wrong side of the work.

This particular designer was converting a pattern originally written for working in the round, to be worked in rows. They weren’t sure about a cable pattern that had cables worked on both sides, that is, on both right and wrong sides of the work. They were wondering about whether you needed different cable stitch symbols for cables worked on the wrong side row, since stitches would be purled rather than knit.

Many of these have travelling stitches that require working cables and twists every single round or row, without a plain row between.

Here’s a favourite of mine: a tidy little column of braids, worked over five stitches against a background of purls. I like to use stitches like this in the place of ribbing for a sock or a mitten, to add a bit of interest to the knitting and the finished project. 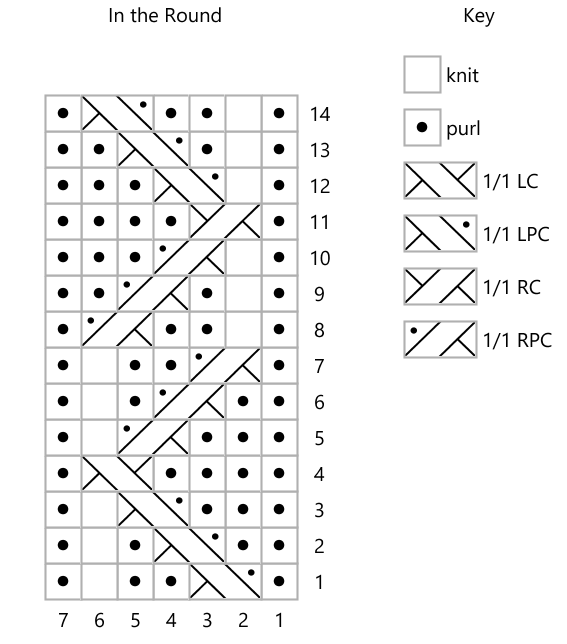 If you’re making a sock or a mitten in the round, the twists are all worked from the RS, of course. If you have a little experience with cables – and with the Stitchmastery charts for them! – you might even be able to work out how do the four special stitches just looking at the symbol.

The L and R in the stitch abbreviation describe the direction of the twist, the lean of the stitch that results.

Some publications and designers use F and B in their cable stitch names, to indicate the placement of the cable needle, whether you hold it at the front or the back of the work. Both solutions are fine, and have their pros and cons. Because cable terminology is not entirely standardised, even if you think you know what the pattern requires, you should always check the glossary when working a pattern with cable stitches.

But what if I wanted to use this pattern on a project worked flat, in rows?

The good news is that the chart doesn’t change one bit – other than moving the row numbers, of course! Remember the symbols represent the how the stitch looks from the right side of the work, so it actually doesn’t matter whether the chart is for something knit in the round or flat. 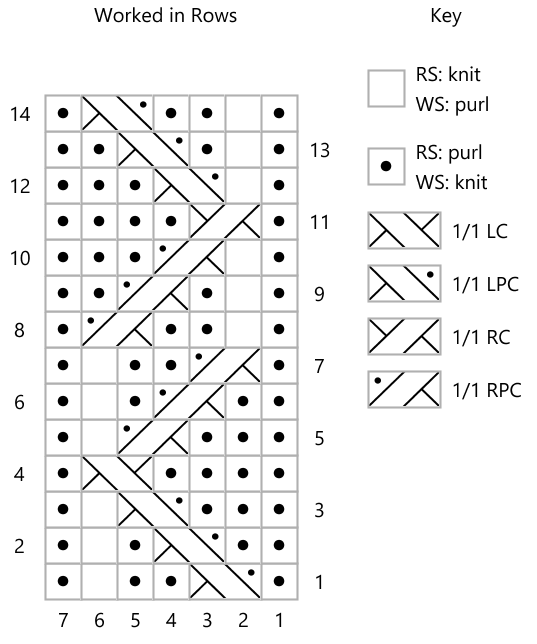 But we do have to think about how to work the cable stitches on the wrong side.

This is where I definitely prefer using L and R in the cable names, since you’ve got a clear indication of the result you want to achieve. It makes it easier to check your work. (Exactly the same reason I’ll argue for always including charts in a pattern that uses cables.)

You want to know the direction of the lean, because – brilliantly! – the lean is the same whether you are working from the front or the back. This makes things so very simple.

And if you’re working purl cables – that is, with knit stitches at the front and purl stitches at the back – it gets even better! It’s exactly the same. The process is the same, and the result. Welcome to the wonderful world of reversible cables!

In this example, 1/1 RPC crosses a knit stitch over a purl, to the right. On the right side, you slip the purl stitch to a cable needle and hold it at the back of your work, knit the next stitch, and then purl the stitch from the cable needle. You’re working the two stitches out of order, so that the second one, the knit stitch, moves to the right, and the purl stitch moves to the left, behind it.

Working this from the wrong side? It’s amazingly the same! It’s ridiculous! It doesn’t even need a second definition. Try it!

This is a bit of a special case, as you’re crossing knits over purls, and you have the same number on both sides. The same thing would happen, for example, if you were working this over four stitches, crossing two knits over two purls.

You do need to create a second definition – that is, instructions for working it from the wrong side – for other types of cable stitches. If everything is knit when worked from the RS, you’ll need to purl both stitches on the wrong side. In the sample chart, this is true for 1/1 LC and 1/1 RC. The cable needle is held in the same place, but the stitches are purled rather than knitted.

You’ll also need to create a WS instruction if you’ve got more complicated cables and twists – those with some stitches worked through the back loop, or uneven cables with different numbers of stitches in the two sides, e.g. a 2/1 LC. But it’s a lot easier than you might expect – the cable needle is held to the same side, and the stitch twists in the same direction. It’s just a case of swapping knits and purls! Easy.