Stitch patterns with changing stitch counts are probably the most challenging to chart.

Stitchmastery offers a flexible tool for handling non-existing stitches: there’s a choice of two symbols (found in the Basic Stitches drawer) – three, really, in that you can actually just have them not there at all.

When representing these, there are a few considerations: which symbol to use – the x, the grey square, or the invisible; how to number the chart; and where to place the symbols. 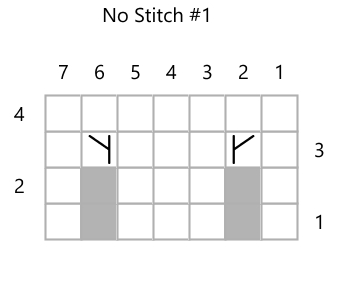 In the first chart, No Stitch #1, there is an increase worked in the third row, and the stitch count stays the same from that point. I’ve placed the stitch numbers at the top of this chart, since the count is accurate there, not the bottom. 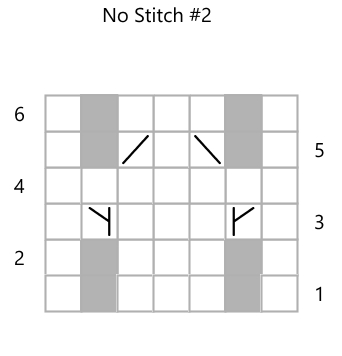 In the second chart, No Stitch #2, the stitch count increases and then later decreases. I’ve removed the column numbers entirely, since the count doesn’t line up with the number of stitches either at the start or end of the chart. Although it doesn’t seem like that much of a problem, it can create confuse in the instructions… if a knitter might need to count those stitches, or refer to them by number, the column numbers on the chart won’t line up with the actual stitch count. If it’s only a handful of stitches, it’s not a problem, but with larger counts there’s a risk of confusion, especially if the knitter is new to working from charts.

In a situation like this, consider putting the stitch count in the chart title or pattern instructions, e.g. “Lace pattern (starts and ends with 5, increases to 7 in the center rows)”.

In these two examples, I’ve used the grey box for the No Stitch symbol, as that’s entirely distinct from all other symbols used and there is no ambiguity. Note that if you do use the grey square, I suggest you edit the key. By default, the key calls the item “grey no stitch” to differentiate it from a grey-coloured stitch – for the knitter’s sake, change that to “No Stitch”. 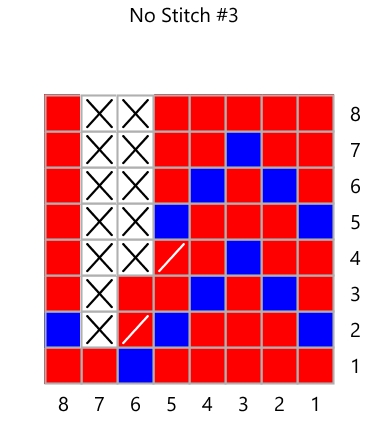 If it’s a colourwork chart, use the X symbol, to keep it distinct (see No Stitch #3).

If the No Stitch symbols are on the edges of the piece, consider removing them entirely: it makes the charts cleaner and tidier – and saves printer ink! Compare No Stitch #4 and No Stitch #5. The “Hide All No Stitch Edges” function makes this easy (found in the Edit menu). And if you hide them entirely, hide the symbol from the key, too.

On the topic of stitch counts, you’ll notice an interesting quirk in the last two charts. Although there are only 12 stitch cells shown in the first row, the section actually starts with 14 stitches – note the two decreases in the row. I’ve chosen to leave the full stitch count visible in the column numbering, to make that clear. In the version where I have left the grey boxes visible the numbers make perfect sense; when I hide the No Stitch Symbols, it’s less obvious what the significance of those orphaned numbers might be. In this situation, I would delete the empty columns, but then make a note in the instructions that the chart starts with 14 stitches. There’s also a good argument here for including the prior row in the chart, so that the column numbers make sense! 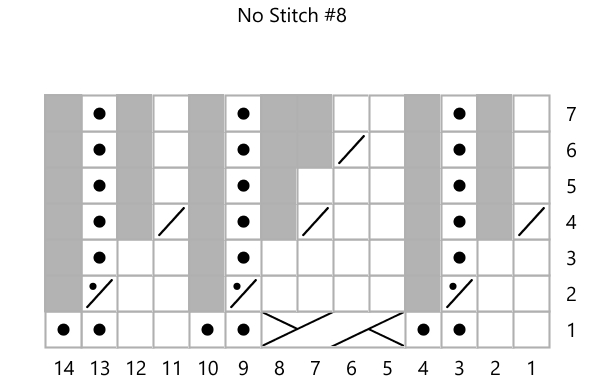 If it’s a stitch pattern with an internal stitch-count change, like this lace pattern, it’s best to leave the No Stitch symbols visible, for complete clarity: 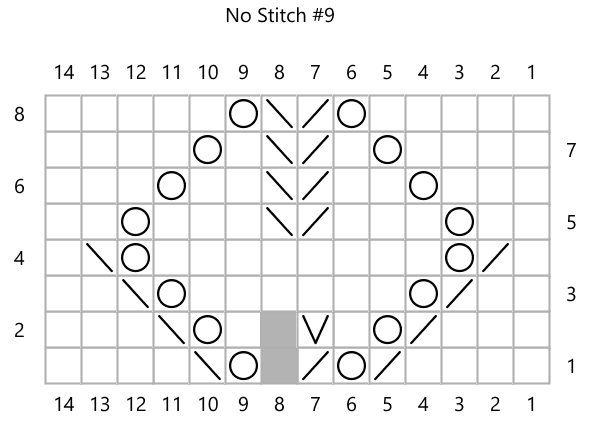 Then of course, you need to consider where to place these symbols.

If there are decreases, there are two strategies: if the decrease is on the edge (either of the piece or the repeat), as in example number 4 above, then place the symbol at the edge, regardless of the type of decrease.

But if the decrease is in the middle of a section, as in examples 6/7/8, then one of two approaches is best: for single decreases, some place the no-stitch symbol to the left of the decrease, regardless of the decrease type. Others place them on opposite sides, depending on whether it’s a left-leaning or right-leaning decrease, as in the example below (No Stitch #12) (You might even want to have them the other way around, so that the no-stitch is to the right of the k2tog, to the left of the skp.) Either way, though: don’t place the No Stitch symbol above the actual decrease. The decrease is the stitch that remains, it’s the stitch beside that disappears. 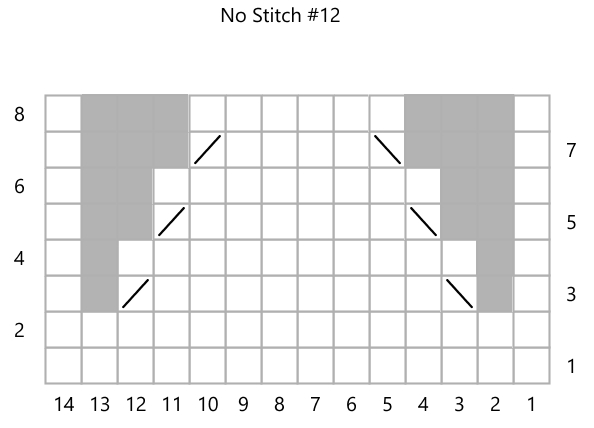 As with so many other things, the most important thing is consistency: remember that you’re teaching your knitter how to read your charts, and the more consistent you are within a single pattern and across your entire pattern line, the quicker they’ll get used to your way of doing it! 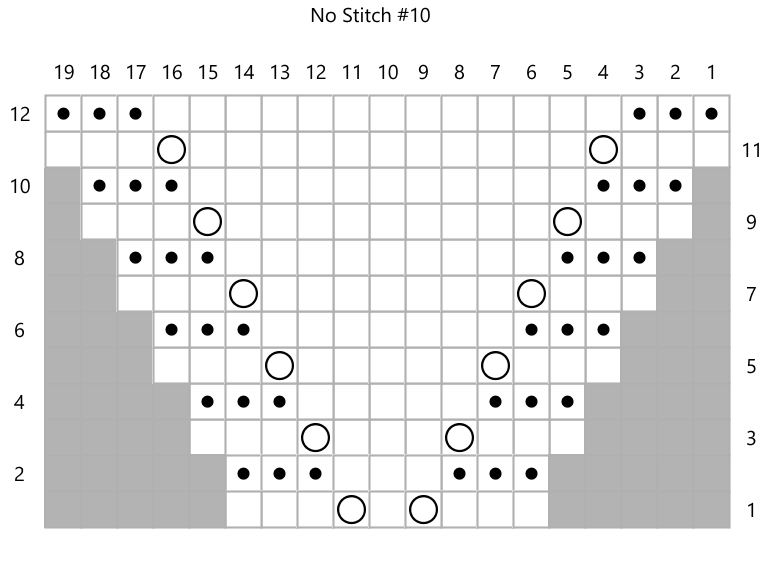 When it’s a shawl with two sections and a central spine, No Stitch #11, you’re better to stack the spine, and treat the two triangles separately. In this case, I’ve stacked the edges to match the central spine, but you could also keep those aligned, as in the previous example. Organizing stitches this way can help the knitter read the chart, and also read their work. If there are logical groupings of stitches – groupings around which you might use a marker, then consider grouping those in the chart.

And think about alignment of the fabric, too. If there are elements of the pattern or fabric that stack on top of each other – for example, cables or ribs – keep those stacked, up, too. If you look at example 6/7/8 above, I could have brought all the remaining stitches in each row together, and placed all the no stitch symbols at the edge, but doing it the way I have makes it easier to see the pattern and the fabric that results.

No matter which of the three versions you use – grey, x or invisible – a No Stitch symbol can be a powerful tool to add clarity to your pattern.

2 thoughts on ““There’s Nothing There!” – guest post by Kate Atherley”