Following Up On Short Rows – guest post from Kate Atherley

In a previous column I talked about charting out short rows.

A reader asked an important follow-up question: how to handle the charting of short rows in the round. We thought it was worth addressing!

When working in the round, your chart has the number labels at the right-hand side of each round. When working short rows, you’re working back and forth in rows, so your row number labels need to appear at alternate sides. In the current version of Stitchmastery, there’s no way to combine round-style and row-style numbering, so you do need to create separate charts for each section.

You can make it a little easier on your knitters by showing the transition rows, though, as follows:

If the cowl was worked entirely in the round, the chart would look like this: 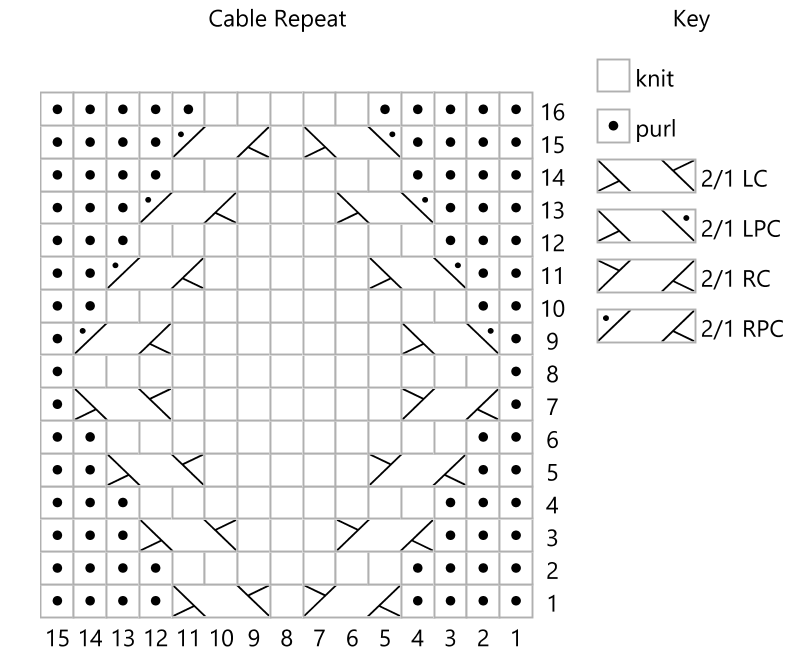 And your written instructions would indicate that the knitter is to work the repeat 8 times.

If there’s a short row, however, to shape the cowl and add depth at the front, I would change the chart.

You can see I’ve broken out the last repeat. The core repeat has a border to indicate that it needs to be worked seven times, and then the last repeat is shown on its own. 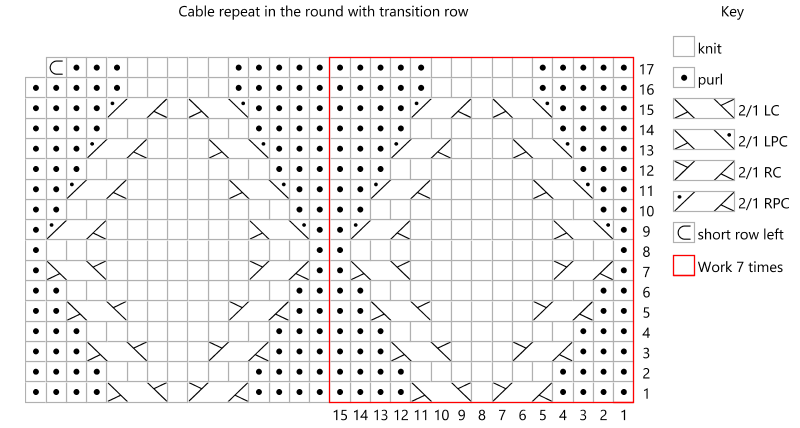 This allows me to place the first short row turn, worked on Round 17, in context, to show that it’s close to the end of the round.

One small note: I’ve only included stitch numbers for the core repeat, it wouldn’t be correct to continue the numbers in sequence to the end of the round, as they’d be wrong. That last stitch is not number 30, but rather 120.

There’s a few things to talk about with this.

• Since we’re now in rows, the key shows stitches with both RS and WS definitions as required.

• I’ve added in a border for the start of the round, to show how the short row turns are positioned relative to that.

• I set the row numbers to start at 17, to align with the first chart. Your instructions should make it clear that row 17 is only to be worked once. It’s on both charts to show positioning.

• I’ve hidden all the stitch numbers for all but the basic repeat. After all, the stitch just to the right of the blue border is actually stitch #120. (To do this, I set the stich numbers in the Chart Properties dialog to start at -13. Yes, that’s right, *minus* 13.)

• The core repeat now is only worked 6 times, since the short rows are worked in the first and last repeats of the round.

• Row 25 stops at the start of the round, since at that point you can pick up working with the standard “in the round” version of the chart.

I hope this is helpful!